Well, banned from a well known watch forum has turned out to be a good thing. The ban was due to vindictive personal reasons on behalf of the Admin, but I can't say that my attitude didn't play a role. I was at a zero-fucks-given point with the site as it was and calling out more and more of the hypocrisy and echo-chamber regurgitation so prevalent.

So why is it a good thing? Well, the realization of how the echo-chamber works and the realization of the direction the site is going. And more time for myself by stopping wasted efforts on correcting the endless echos of incorrect information.

I'll throw some details on the groupthink ideas from time to time, but today I'll focus on what I'm doing now. The watches.

With my inconsistent focus, well demonstrated by posting irregularities, I've broadened the task of making a watch, into many watches. Why? Because my brain doesn't seem to operate well on the 'simplify tasks' model. I need multiple tasks on the go concurrently to jump around to as I get bored/frustrated with whatever is current.

So what are the watches?

By movement, I have 2 Unitas 6498 on the go. A Standard and a very nicely decorated Élaboré. Both with the same case, but different concepts. Several different hand sets to fit to whatever concepts. One dressy, and one more casual.

I have 2 ÉTA 2824 projects, but currently only one Top grade movement. One is a German case dive watch, the other a coin-edge watch intent to be a women's 'boyfriend' size watch. Both have case and hands ready, waiting for dials as well. I only have a single movement at the time as I'm toying with the idea of using a thin 2892 movement in a 2824 case to be able to use a thicker dial. Thicker dial for enamel reasons. In the interim I can swap the movement between projects with ordinary dial sizing.

I have a Miyota 824x, I want to say 8247 but can't remember exactly, with just the hour, minute, and ~4H-ish placed small seconds hand. The 'pretty' (it's Miyota, so less ugly really) decoration and open rotor. This will be for a custom, cast bronze case experiment. And to test laser-cut hands to see if that can work. It's a pure R&D project, as Miyotas don't carry enough movement cachet without 7Friday-levels of marketing to command decent pricing.

Last, I have a 7750 project en-route. There is no design work on my side at all. I'll be ordering an Élaboré grade movement shortly. This is inspired by my buddy's fake Rolex Daytona with the Chinese day-date-24h layout. He broke the crystal being stupid and I told him I would get it replaced. But I hate that piece of shit. So I'm going to make him a legit, sterile, real chronograph, pending he actually quits drinking (the contributor to breaking his fake). And by 'sterile', I don't mean a logo-less Daytona fake, but an assembly of NOS Swiss parts from ~1990s that have no branding, and it won't be a representative of my future brand vision. I'll post pics when the parts get here, but here's a description. The case is two-tone stainless and yellow gold, the case is stainless, the crown and pushers gold plated. The bezel is a Submariner-style diver, gold plated and gold numerals with blue background. The dial is blue, 7750-pattern 6-9-12 subdials, also blue with gold border. Applied gold indices at 1,2,4,5,7,8,10,11 with lume dots. Gold printing. Date only with gold surround. Hands are gold baton style with lume. It's going to be retro-bling badassery.

Anyways, that's it for today. I'll see what pics I decide to throw up with this, as I think I took the case photos off my phone recently, so the pics will probably be stock ones. (Okay, no relevant pics at the moment as I'm getting a publish error. Pics taken from the Camera app are OK, though. So here's the Longines I'm wearing at Canada Place.) 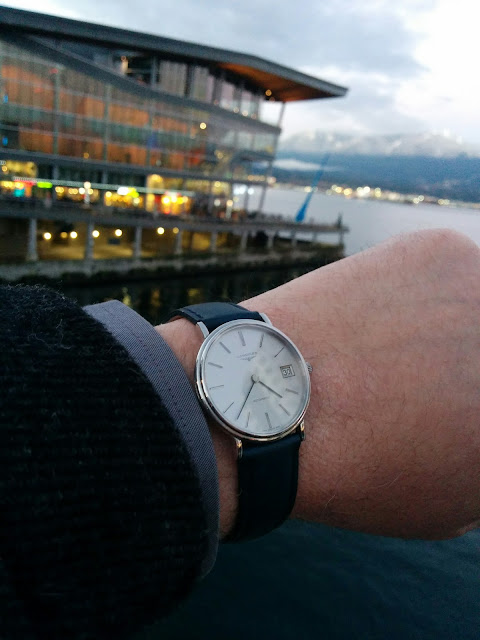