Some thoughts on my Tissot Couturier automatic.

This is a watch that I was very attracted to when I first saw pictures of it, but while I still like it the shine has metaphorically worn off a bit.

The basics of what this is is a fairly simple watch with a plated rose gold case, black dial, and asymmetrically laid out dial with time, small seconds, and date window. Originally it came with a fitted black leather strap that felt like plastic garbage. It's now on a Hirsch Merino leather, and the factory butterfly style deployant.

Since the styling was what attracted me, I'll talk about it first. The dial layout is somewhat reminiscent of the legendary Lange 1, from the crown jewel of Richemont's Maisons, A.Lange & Sohne. But it also has a minimalist approach, lacking individual minute markers for the time, as well as not having any lume. The case is a mix of polished and brushed surfaces but seems rather thick, or at least tall. This is probably due to the movement height.

So with regards to the technical stuff of the movement, it's an interesting approach. From what I've read it's referred to as a 2825. It seems to be simply a module attached to a 2824 base, following nomenclature seen by ETA with the 289x variants. From looking at other uses within Tissot and Hamilton (brothers within the Swatch Group's family), it's probably a plate that allows offsetting of the hours, minutes, or seconds in a variety of positions. It's neat for easily changing dial presentation rather drastically on a single movement.

Timing and quality is anecdotal, based on a sample of... two. Why two? Because the first one I received had a faulty crown that did nothing to impress me with my first new from an Authorized Dealer 'Swiss Made' watch. My Seiko and Orient autos at a fraction of the price have all been perfect out of the box. But small sample size, anecdotal, yada, yada. So how about timing? First off, it's not a huge priority on a watch I can only accurately set at 5 minute intervals. But even so, it's kinda meh. Gains maybe a couple minutes a week, which is on par with my worst Seiko 5 (7S26). Not impressed again, and I'm not sure what the spec is for this new 2825, nor even the grade of this specific movement. It's probably in spec for a ETA Standard grade, which would be my guess by looking at the movement. Despite a couple blued screws and a striped rotor, the key tells for it not being a more accurate grade are the Novodiac rather than Incabloc shock protection, and the straight balance spokes that indicates nickel rather than Glucydur. But like I said this is more of a looker than a performer. I can live.

Overall it's OK. I bought it as a reward for busting ass at work on a long, crazy, OT shift. It's not going anywhere. But still only gets on the wrist about once a month or two. 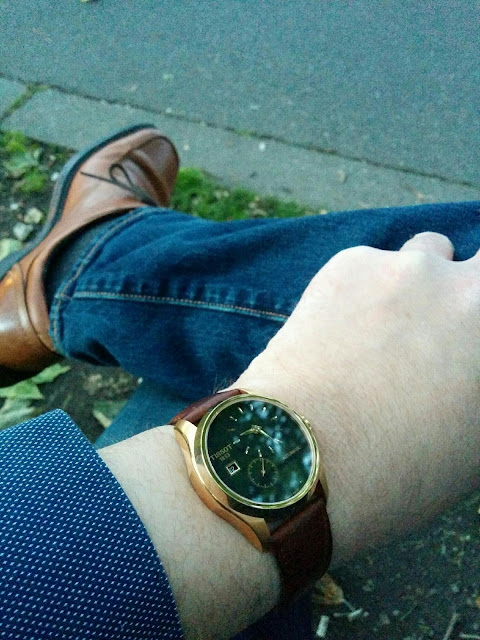